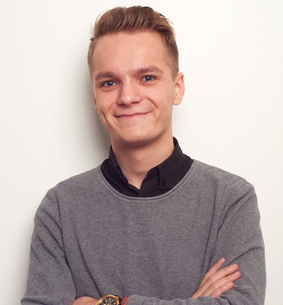 "This is the guy you're looking for! Hire him NOW!"

- Basically all my clients.

Kristian Östberg is a Freelance Motion Designer based in Stockholm, Sweden.

Two years of VFX education made him work as a full time freelance Motion Designer available for all different types of clients all over the world!

With a heart for creativity and videos getting that extra touch to make them feel alive, Kristian always makes sure that both parts are 100% happy with the progress and result throughout of the project.

With +6 years of experience in the industry Kristian are well assure of the process from start to finish with all kinds of projects. He will do everything in his power to ensure the project allways reach the finnish line within the deadline!

With wide knowledge about 2D animation and infographics there's nothing stopping us to create the next big explainer video for your company today!

Maybe you're looking to get your company logo made in 3D?

Or you want some cool text with that sweet 3D effect?

Hit me up and we'll get that sorted!

By working close with Dreamhack over the last two years

I've been asked to create alot of broadcast overlays for their twitch stream when they are having events all over the world!

After a two year university education in VFX the possibilities

of mixing Motion Graphics and live footage are now possible!

Keying, tracking, video clean up fixes... and much more!

A bunch of opening titles and vignettes has been made over

the last few years. I've learned alot about typography and placements of text, what really works and what doesn't.

Even if it's a small logo animation or a full two minute explainer video, you gotta have some sound to it!